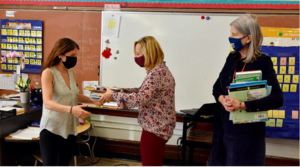 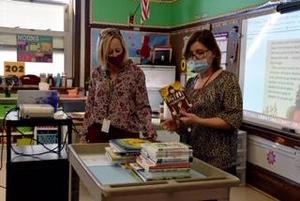 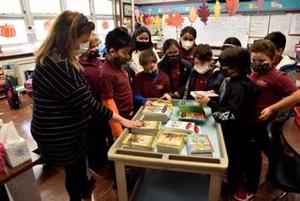 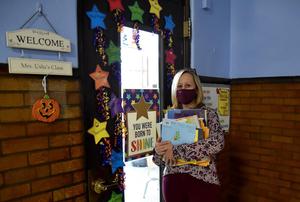 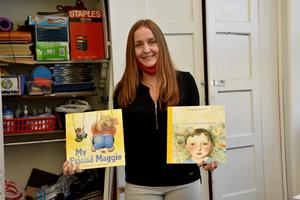 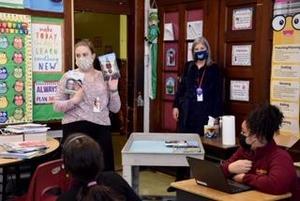 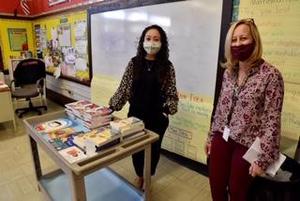 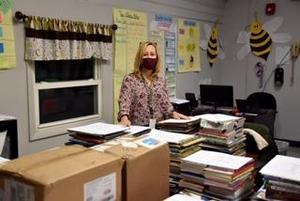 As one might expect, The Book Room at Robert Fulton Elementary School in North Bergen is deserving of its name.

On the morning of Nov. 9, though, it was the home to many more printed works than usual.

On the long, brown tables in the middle of the room were several fresh-from-the-box stacks of books, purchased by Local 1060 from First Book through an AFT Back to School grant. But these books would not be here much longer: They were all earmarked for classroom libraries around the school.

Giambelluca is in her sixth year as a literacy coach at Robert Fulton, where she’s worked for more than 25 years.

“We were seeking to refresh our classroom libraries,” she said about making use of Local 1060’s grant from AFT. “A lot of teachers decided to focus on the SEL-type books, and then some of the older grades decided they wanted to do literature circles, so they ordered multiple copies of a chapter book.”

Being a literacy coach involves working with teachers on their literacy programs, providing tips and strategies, reviewing data, and other duties, she explained.

“I am pretty much all over the building on a daily basis,” said Giambelluca.

This particular Tuesday that she dubbed “distribution day” would be no exception. Giambelluca’s first delivery was to third-grade teacher Drita Turdiu’s class, where students responded to the new books with a smattering of cheers. And as the morning unfolded, other classrooms reacted with similar enthusiasm when Giambelluca rolled in her book-filled cart.

“I saw some of the book titles, so now our kids are seeing themselves in those books — they can see what’s possible for them,” Toomey said. “I think it’s great because teachers do buy so many things on their own, this is a nice benefit.”

The new books will not only benefit current students but remain in classroom libraries for years, she added.

“I think it’s great that we’re modeling excitement over books,” Toomey said. “This is something to really be happy about.”